The Bayberry Bush is a slow-growing, fragrant shrub praised for the novelty its berries (not their flowers) add to the landscape in winter, as well as its ability to attract birds.

Bayberry Bushes are often planted in groups of woodlands, to create private screens, for the creation of informal hedges, or in banks to control erosion. The Bayberry Bushes tolerate salty soils, so it’s common to see them planted around seashore buildings.

The Bayberry Bush (Myrica Pensylvanica) is commonly known as candle berry or wax myrtle, a shrub from a large Myricaceae family.

It also is referred to as the Northern Bayberry.

There are between 30 and 50 variations of the Myrica.

They all have very similar characteristics or genus.

Different varieties of Myrica shrubs can be found in Asia, the US, Africa, and parts of Europe.

The Bayberry Bush produces fragrance all year round through their leaves and not through their blooms, so treat yourself, pinching the leaves to release their fragrance when passing by.

The Bayberry Bush grows clusters of berries which are from blue to grey shade and its leaves are deep green.

An interesting fact about the Bayberry Bush is that its berries can be used to make candles and soaps because of their strong fragrance. The Bayberry Bush is a hardy, sturdy shrub.

It is very dense with lots of leaves that have a rubbery texture.

This plant is aromatic from both the leaves and the fruit it grows.

The foliage of the Bayberry Bush is evergreen.

Glossy, knife-blade-shaped leaves with small freckles on them.

The Bayberry leaves have a distinctive, pleasant, balsamic aroma; however, they taste very bitter.

The deep green leaves of the Bayberry plant turn bronze in winter.

The Bayberry’s berries are of small spherical shape (about 3mm in diameter) that grows in clusters attached to the stem joining, covered with a greenish-white waxy substance.

The seed of the Bayberry plant ripens in October.

The Bayberry Bush thrives best when planted in groups and can tolerate drought, strong winds, cold winters, and even flooding.

In optimal conditions, the Bayberry Bush reaches between 3 to 8 feet (1 to 2.4 m approx.) in height and spreads widely as much.

The Bayberry Bush grows flowers from April to May, although ornamentally insignificant.

The flowers are produced in catkins (slim, cylindrical clusters with no petals) of about 3 to 18 mm long, in a variety of colors from green to red.

Growing a Bayberry Bush is quite effortless as they do grow well in sterile-like soils.

Not much soil preparation is required.

If you are looking for a quality plant with low maintenance, the Bayberry Bush is highly recommended. Unlike other plants, this shrub thrives all year round, and its peak season is actually in winter which is when the most growth happens.

In the winter, the bright green leaves turn a gorgeous brown/bronze color.

A sandy beachfront is a perfect and popular spot for this hardy shrub to grow.

Also known as edging plants, the Bayberry Bush is very dense and looks gorgeous around the outskirts of your garden.

Planting them four to six feet apart is ideal and will ensure they do not overcrowd or become too dense.

Simply, the Bayberry Bush does not require much attention when it comes to watering.

In the beginning, you should water your plant weekly to ensure it has the best chance of blooming as well as ensuring that the soil is well-drained and dry in between.

Once your Bayberry Bush is established, you can get away with less watering as it can survive well in drought.

In saying this, if you have a big established garden with many plants, having a specific day where you can water everything at once is a great idea and this too will not harm your Bayberry Bush.

As this plant survives well through winter, depending on rainfall, you can also adjust your watering schedule during these times.

Luckily, the Bayberry Bush can survive saturation as well as dryness!

The Bayberry Bush will grow in either full sun or partial sun.

When choosing where to plant it, make sure it will at least get a good amount of sun exposure throughout the day.

This plant is often seen at the beachfront, where it is sunny and sandy!

It needs a minimum of four hours of full sun exposure per day.

The Bayberry Bush thrives in most soil conditions, including clay and sand, but they particularly like sandy soil.

The ideal soil pH for the Bayberry Bush is neutral to slightly acidic, with pH levels between 6 to 7.5.

There is no need to fertilize the Bayberry shrubs as they can extract nitrogen from the air; therefore, it grows well even in poor soils.

Bayberry Bushes are also used for nutrient soil replenishment due to their capability to infuse nitrogen into it.

The Bayberry Bush thrives most in summer.

The temperature and humidity are not something to be concerned about.

This shrub can be planted straight into the soil outside.

Seeds should be planted in rows spacing between 8 and 12 inches to ensure they have plenty of room to grow.

They also should be about ¼ inch below the soil. If you need to move your Bayberry Bush, transplant it just after flowering or in fall.

Bayberry shrubs transplanted in late spring or summer are more likely to suffer injury to their roots.

Soak the Bayberry Bush a couple of days before you re-pot it, so the root system remains moist.

Immobilize low branches tying them up to the trunk to prevent damage while transplanting. Replant the Bayberry Bush in orientation to the sun.

Propagating is very simple. Once all blooms have faded, make sure to cut at least six inches of the plant right under the leaf node.

You can then plant the cutting into a container/pot of wet sand, watering any time the sand becomes dry.

This will help to begin the cycle of growth again before replanting in a bigger pot or back outdoors.

Apply a layer of mulch about three inches thick on top of the soil. Doing this helps with moisture retention.

Pruning your Bayberry Bush is best done in spring.

This is usually done so to maintain and control its growth as it can get quite dense. Pruning also helps your plant to get the correct airflow.

The Bayberry Bush is very easy to grow and maintain.

The fruit is usually used to make things like candles, soaps, and waxes.

It is a great idea to create some homemade gifts for family and friends.

You can easily research how to make things such as candles once you have harvested the berries of your Bayberry plant.

The leaves of the Bayberry Bush, which are very similar to bay leaves, are a popular herb that can be used to flavor some of your yummy meals.

The Bayberry Bush is commonly a stunning addition to dried flower arrangements or wreaths at Christmas time.

There are many DIY opportunities when you have easy access to your Bayberry Bush.

The Bayberry Bush is classified as part of the astringent herbs.

Having antimicrobial capabilities, the Bayberry plant is used to treat common cold symptoms or sore throat, as well as an ingredient to produce mouthwash.

Powdered Bayberry root is useful for the treatment of digestive disorders such as diarrhea and colitis.

Some cosmetic products like shaving creams are also made from Bayberry wax.

Bayberry leaf tea is good for treating fevers and as a wash for itchy skin. 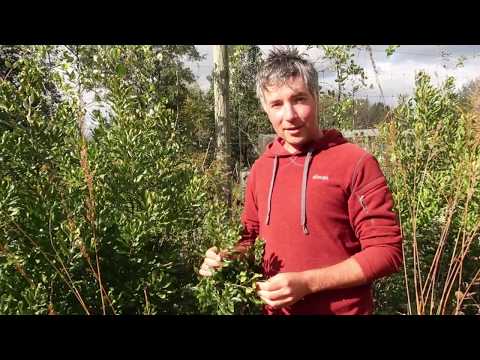 Thankfully, the Bayberry Bush does not have too many problems.

Because this bush is fragrant, it rarely has pests or insects although, the common problem to watch out for is leaf spots.

Generally, leaf spots are caused by fungus or bacteria which infect the leaves of the plants.

Identifying leaf spots is quite simple. There will be various sized spots on your leaves that can be different colors such as brown, black or yellow.

Over time, some spots may grow and combine to make bigger spots.

This problem is quite easily taken care of.

You can simply remove the infected leaves as leaf spots do not infect the roots.

In most cases, the new foliage will be healthy and will not necessarily get leaf spots as well.

Be sure to keep the foliage dry to maintain its healthy growth.

Also, keep in mind that they need to be well-spaced when planting your shrub.

The easiest and quickest way to find quality Bayberry Bush seeds is online!

Click Here to follow the link so you can purchase these wonderful seeds in the comfort of your very own home.

Alternatively, you can shop for seeds at your local garden specialist or nursery.

How big does the Bayberry Bush grow?

The Bayberry Bush is a medium-sized shrub that varies in size. Although growing as tall as 20 ft, some Bayberry variations can be as small as 5ft. Generally, the Northern Bayberry grows on average 10 feet tall and 10 feet wide.

Where do Bayberries come from?

Generally, they are found in Northern America, hence the name Northern Bayberry.

How fast does the Bayberry Bush grow?

As previously mentioned, there are up to 50 variations of the Myrica genus.

Although most are similar, their growing time frame would differ.

As they are known to grow moderately, the size of your Bayberry Bush would also contribute to the time frame in which your shrub would grow.

How you care for your Bayberry would also be a factor.

What is the season of interest for the Bayberry?

Unlike most, the Bayberry Bush is a summer shrub! It thrives most in hotter conditions throughout the summer. As it is such a low-maintenance shrub, it can survive most soil and weather conditions.

What is the difference between a Bayberry and a Barberry?

While both are shrubs, the Bayberry and the Barberry have many similarities but are from different plant families.

Their likeness can be confusing, as they both are taken care of the same way, they grow in similar conditions, and are both sturdy and dense bushes.

The Barberry is usually red in color and a golden yellow or light green foliage. It also grows thorns on its branches.

As mentioned earlier, yes, they are. However, the quality of the edible flesh is poor.

This is why it is usually used as a herb to add flavoring to your meals.

Are the berries on a Bayberry Bush edible?

There is not enough evidence to prove they are safe to eat.

As their quality is poor, they are more so used when cooking or making things such as candles and soaps.

Yes! Because the Bayberry Bush is fragrant, it usually deters any deers from trying to eat them.