The lemon verbena or Aloysia Citriodora is the most popular lemon-scented herb known for its intense oil concentration.

This plant mainly grows in South America, northern Africa, southern Europe, and Iran, but it can also grow in other tropical areas under the right conditions.

It is widely used as an additive to drinks, baked goods, or even in the form of lemon zest since it’s not bitter. Its leaves and flowering tops are often used in medicinal preparations.

It has spear-shaped leaves that grow quickly in hot summer weather, replenishing the plant as harvested throughout the growing season.

In the perennial zone, it acts as an anchor to other shrubs in your landscape, releasing a citrusy aroma.

This plant tends to grow quickly and gives off an intense citrusy smell in the full sun.

While this shrubby plant thrives from regular pruning, it also helps flourish the leaves for use in beverages and dishes.

Besides this, it is used as a popular flavor for fish and vegetable dishes. This is a beautiful plant that initially looks small. However, it can grow into an elegant-looking shrub at almost 6 feet tall and often spreading to 8 feet in width.

This plant is also quite sensitive to changing weather conditions so; you should not be discouraged if it drops all its leaves during the cooler seasons.

To a first-time planter, the leafless sticks might look dead and cause you to discard them.

These so-called dead stems often sprout up in the discarded places, so check twice before you do away with them.

If you are growing it as a winter plant indoors, a sudden leaf loss might frequently occur as it reacts to the rapid temperature change or root disturbance.

This is often caused by placing potted plants indoors during the late summers or after the first frost.

Some gardeners grow lemon verbena in pots so that they have more control over their growing environment.

While this may be a convenient option that avoids annual transplant shock, the difference between growing them in pots and the ground is that drastic.

The soil causes rapid temperature changes in pots that could be detrimental to the plant’s health over time.

Initially, the lemon verbena was cultivated for its oil.

Otherwise, it is also grown in containers that may be overwintered indoors in bright, cool locations with minimal watering.

Some gardeners grow it as an annual that is replaced with new plants each spring.

If you prune the tips from the main stems, it promotes branching and gives it a shrubbier form. This plant needs to be watered carefully as overwatering can lead to dormant, lifeless plants.

Like other shrubs, this plant transpires water mainly through its leaves; This means that a leafless plant uses lesser water than a full leafy one.

In case of leaf loss, drastically cut back on watering. Reduce the frequency by lightly spraying smaller amounts and sticking to a fixed schedule.

In colder areas, some gardeners transport the plant indoors after enduring an early frost.

It is usually not watered at this stage during indoor dormancy. With adequate drainage, the lemon verbena can tolerate a wide range of water conditions.

If you water it outdoors in cold climatic conditions, it will withhold water once the freezing weather approaches.

This enables the plant will harden off and prevents the roots from getting wet when they freeze.

The surface of the soil should be moist but not oversaturated. If you must, then water them sparingly, maybe even weekly.

In most northern regions, the lemon verbena thrives in full sun.

If you place it in a site that reflects the light of a white fence or greenhouse wall, it is even better for the plant.

In areas that are closer to its native latitude or near the equator, it matures better, under a partly shady area, during some time of the day.

So it is a good solution to place it near some neighboring trees or buildings that don’t overshadow the plant.

You may have to supplement them with artificial lighting if you grow them indoors. This will prevent lanky growth and leaf drop.

Additionally, it needs rich organic matter and proper drainage to help it grow.

Clay or acidic soils are not suitable for this plant. If your soil has a lot of sand and a little lime, then it enables better growth.

The best recommendation is moisture-retentive soil, as the lemon verbena can rot if its roots are constantly wet.

It is found that it does well in rich garden loam and can also tolerate average soil.

You can plant them in raised beds or containers as long as there is good drainage (which is an essential component for healthy lemon verbena plants).

Regular fertilizing will keep the plant lush and growing vigorously.

In native areas like South America, this plant grows in a sunny, frost-free climate.

Growing them in temperatures below 40 degrees Fahrenheit triggers leaf drop and dormancy.

This plant can only do well in dry or humid environments.

However, it is possible to overwinter it outdoors in zones 8-10 and warmer.

The preferred solution is to help it harden by reducing watering a few weeks before the onset of below-freezing temperatures.

If you live in the northern zones, make sure to transfer the plants indoors before the onset of winter or keep it out until the early frost to ensure that the leaves drop.

This dependence on the weather to drop the leaves prevents regular cleaning and insects from being carried inside.

You can thin it down, remove the spindly stems and add it as a citrusy scent for your closets or drawers.

Once you begin potting, use rich potting soil and amend it with leaf mold or composted manure to keep it healthy.

If you want to cultivate it all year round, especially in the colder regions, then grow it in a container, as this makes it more manageable.

The container should be kept in full sun and be watered daily.

Once the temperatures drop below 40 degrees Fahrenheit, transfer it indoors or to a greenhouse.

This plant will lose its leaves in winter, so you can plant it in the pot during the spring season before the new growing season begins.

You can opt for a container at least 12 inches in diameter, giving the roots more space to spread.

A larger pot will also do, as it can provide good insulation against soil temperature changes.

Similar to rosemary and lavender, this plant’s semi-ripe cuttings can be used for propagating and pruning.

You will need to snip a flower-free stem above a leaf node, remove all but the top two sets of leaves and insert the cutting into a moist, sterile potting mix.

Maintain the moisture level until new leaves form and transplant it into a sunny site with good drainage.

When grown in containers, the Lemon verbena plant rarely exceeds 2 or 3 feet. The shrubs, however, can exceed 8 feet outdoors in frost-free climates.

Since they can become woody and lanky, you must cut plants back by half in early spring for bushier growth.

Snip the stem frequently to prevent them from becoming lanky.

For dried leaves, you can bundle and hang them upside down in a dark, dry place or seal them in containers. 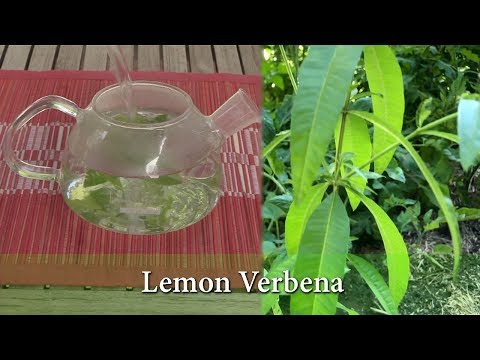 This perennial shrub has slightly rough, pointed leaves that emit a powerful lemon scent when crushed, adding a fresh aroma to the environment.

It is commonly used in homes as a potpourri. You can retain the scent from the dried leaves for a long time.

If you like to add some flavor to your tea, then its dried leaves can turn into a delicious lemony beverage.

However, when using it to add flavor to dishes, the amount has to be controlled, resulting in a slightly bitter or spicy taste.

The pleasant, fragrant tea is specifically used as a gentle sedative.

It is known to reduce fever, upset stomach upset, or intestinal spasms while also soothing bronchial and nasal congestion.

Its main feature is the essential oil that is responsible for the delightful lemon scent, which is also used commercially in flavoring liqueurs.

Its medicinal effects are widely known even though it is quite mild. Its purple or white flowers keep away mosquitoes and flies.

This plant attracts common pests like whitefly and spider mites. Gardeners can combat this by spraying the leaves on top and bottom with insecticidal soap.

You could also use a solution of 1 teaspoon dishwashing liquid, vegetable oil, and 1 quarter of water three times at ten-day intervals.

Proceed to rinse about three hours after application.

Also, misting the plants thoroughly at least twice a week after treatment can be impactful and prevent further infestation.

Where to Find High-Quality Seeds

For brilliant plant growth and flourishing plants, you should always use high-quality seeds, which are readily available on Amazon.com. For more information, click on the following links.

Some commonly asked questions on the Lemon Verbena plant are as follows:

Can Lemon Verbena be used in place of lemon zest?

Yes, it can. It is comparatively less bitter and adds great flavor to your recipes.

Can the Lemon Verbena be grown from seeds?

Yes, it can. It does, however, produce few viable seeds, so it is better to use young plants.

How much space should be kept between lemon verbena plants?

You could keep a space of 1’1” or 35 cm as a minimum requirement for single plants. When planting in rows, keep it at 11” with 1’5” gaps between the rows.