Serrano peppers are small, colorful fruit that is easy to recognize by their skinny, elongated shape and characteristic biting.

The Serrano Pepper is like a jalapeno pepper but smaller and a bit spicier. The Serrano Pepper is native to Mexico first discovered in the rough mountains of Puebla (Sierras de Puebla), hence its name “serrano”, which means “from the mountains” in Spanish.

These peppers are traditionally consumed in Mexico but have gained popularity around the world for the making of fleshy, smoky flavored dishes such as salsas, stir fry, pickled vegetables, and many other dishes.

It is the ideal seasoning for many recipes.

Serrano pepper has been given the scientific name of Capsicum Annuum and belongs to the Solanaceae family (flowering plants).

They are low in sodium, low in fat, and are a great source of protein too. Serrano peppers are nutritious and give you a good boost of antioxidants.

The serrano pepper is a dense, bushy plant with characteristic hairy, light green leaves that produce large quantities of fruit in the growing season.

The serrano pepper plant produces small, white flowers before converting them into fruits (the actual pepper) which takes about 85 days after planting. The fruits are narrow with a conical-like shape.

The peppers of the serrano pepper plant are elongated between 1 to 2 inches (2.5 to 5 cm.) long once matured, but they can grow twice the size according to their varieties.

The serrano peppers are fiery hot. They have a high content of capsaicinoids which are responsible for their spiciness.

The measurements of hotness in the chilies or anything derived with the use of chilies are given by the Scoville heat scale (Wilbur Scoville, its creator).

Serrano peppers are on the 20,000 to 35.000 Scoville units, about five times hotter than jalapenos.

The color of serrano peppers changes according to maturity, ranging from green to yellow, orange, brown, or red when fully matured, but the maturity of the serrano peppers is not related to their spiciness but their size.

The smaller the pepper, the spicier it is.

The serrano peppers have a thin, crispy skin, making them a favorite option for making salsas, and they can also be eaten raw.

These plants produce bunches of up to 50 pepper pods-like per plant, so unsurprisingly, you can harvest something like 2.5 pounds (1 kg.) or more of peppers per plant.

The fruit (peppers) of the serrano peppers plant can be harvested early when they are still green or wait until bright red when they are fully matured.

However, harvesting the peppers while they are still green stimulates the plant to flower more, hence producing more fruits. Besides their biting heat and smoky flavor, serrano peppers can also be part of a healthy diet.

The serrano peppers are low in fat, low in calories, and contain vitamins (A and C), minerals (iron, magnesium), and protein.

The concentration of the chemical Capsaicin present in the serrano peppers is responsible for their hotness rating.

Some studies have demonstrated that capsaicin helps to program cell death in cancer cells, causing them to self-destruct.

Serrano peppers also can cool the body down if you have a temperature or feel overly hot.

Serrano peppers are not only beneficial for your body but can be used as an ornamental display of vibrant colors in your garden or containers. Growing the serrano peppers plant is not difficult at all, contrary to the other types of peppers.

The serrano pepper plants give you several decent yields thanks to their prolific capacity to produce fruits.

Top Tip: Grow them in Spring after the risk of frost has passed, so they will be ready for the first harvest after three months.

Serrano peppers can be grown from seeds or be transplanted from purchased seedlings from a nursery or garden center.

They can commonly be harvested early from 10 weeks after planting and up to three months.

However, gardeners can plant serrano peppers in containers, but the container should be at least 3 gallons (13 liters approx.) to allow the roots to develop properly.

Start sowing serrano peppers indoors, then take them outdoors three weeks after the last frost, checking that the soil temperature at night is constant and about 55F (12C approx.) minimum.

Serrano peppers plant should receive plenty of sun and heat; however, temperatures above 75F (23C approx.) will impact the harvest by reducing yields.

Prepare the soil with fertilizers rich in phosphorous, calcium, and potassium and with organic matter but take it easy with the content of nitrogen.

A high concentration of nitrogen can certainly improve the appearance of their foliage but compromise the production of fruits.

Consider mulching or covering roots with a plastic sheet to help them to retain the soil moisture.

Highly prolific serrano peppers plant can give you as much as 2.5 pounds (1kg approx.) of peppers from a single plant.

Like any other peppers plant, Serrano peppers can be harvested while still green, or you can wait until they ripen.

Harvest the fruit by cutting the stems using scissors or pruning shears instead of pulling them from the plant.

Leave about 2cm of the stem attached to the pepper to help preserve.

Rotation is important when growing serrano peppers, as their performance is greatly decreased when planting in the same location.

The serrano peppers are not big but heavy on the plant due to the several quantities produced at a time.

Take the strained off by tying the stems to stakes with a pantyhose or nylon, as they are more soft materials.

Other materials, including twine, can snap the stems while the plant develops.

Not all the plants need staking. Just check for those that start bowing or sagging heavily and action.

Detach any early blossoms, so the plants activate the producing of more fruit later in the season.

The flavor of serrano peppers improves as they mature.

It is very important to water the serrano peppers throughout the growing season.

Make sure to water them frequently too, and especially during hot spells.

Best watering practices are deep on roots once every three to four days as opposed to a light daily watering.

Normally the top layer of the soil feels dry to the touch. Add a thick layer of mulch will help with water retention and soil temperature.

Serrano peppers are tropical plants. They should receive plenty of sunlight.

Place your plants in a full sun position to thrive. At least six hours of sun a day is ideal.

Even after harvest, they should remain in the sun to ripen.

Serrano peppers demand soil that is rich in organic matter and has good drainage.

The lack of well-draining soil causes diseases as base and root rot.

Ideally, loamy soil (a mix of clay, sand, and humus) is best for growing serrano peppers because it holds moisture while allowing air and water flow.

Temperature and Humidity for Serrano Peppers

Serrano peppers plant is considered a tropical perennial as their origins are in warm, frost-free climates.

The serrano peppers plant thrives in warm temperatures between 60 to 70F (15 to 20C approx.).

Temperatures above 75F (23c) reduce the production of fruits.

Plant your serrano peppers seedlings on an overcast day when possible and when the risk of frost has passed.

Space out each plant about 18 inches to allow them plenty of room to grow. Water the seedlings thoroughly.

Best practice when growing serrano peppers is initially doing it in spring and indoors.

Then after between eight to 12 weeks, transplant them outdoors.

While the serrano peppers seedlings stay indoors, water them regularly but without overwatering.

Keep them in a sunny location as on windowsills or any other warm place where they can receive plenty of sunlight.

After the risk of frost is gone the seedlings can be brought outside. Always place them in a sunny spot.

Sow seeds at least 2.5cm deep into the soil.

Do not rush to bring the plants outdoors if conditions aren’t optimal, as this affects harvest results.

Serrano pepper seedlings are ready for transplant after seven or eight weeks of planting when they are about 6-8inch(15-20cm) tall.

Top Tip: Take the plants outdoors, increasing the time gradually over three weeks to 6 hours, so your plant is fully hardened.

The condition of serrano peppers being perennials that come back non-stop.

They are not affected by frost, making these plants a great indoor candidate during the fall months.

Serrano pepper plants can still produce fruit while indoors, providing they get the right amount of light and heat they need to continue to yield.

Growing serrano peppers from cuttings is a great approach if you don’t have seeds.

However, growing peppers from cuttings are common practice with ornamental types, but gardeners can use any kind of pepper stem. Follow these easy steps:

You can prune your serrano pepper plants by checking for leaves and branches that are not in good form, affecting the plant to develop properly.

Remove from the plant the lower leaves that have turned yellow and discard them.

Do not let them sit near the plant or sit in the soil, increasing the risk of disease development.

The pepper plant will develop weak branches if growing under poor lighting conditions, so trimming them back about 3-6 inches from the main stem will encourage the plant to grow more and develop denser branches.

The serrano pepper plants that have been grown in cooler climates and in containers can be overwintered by bringing them indoors.

The plant will go dormant and will start turning yellow.

Prune the plant’s top growth to prevent the development of mold and disease spread in the rest of the plant.

Always use disinfected shears or scissors to prune the plants at least five weeks before the first frost and apply good fertilizer to each plant to encourage new growth. 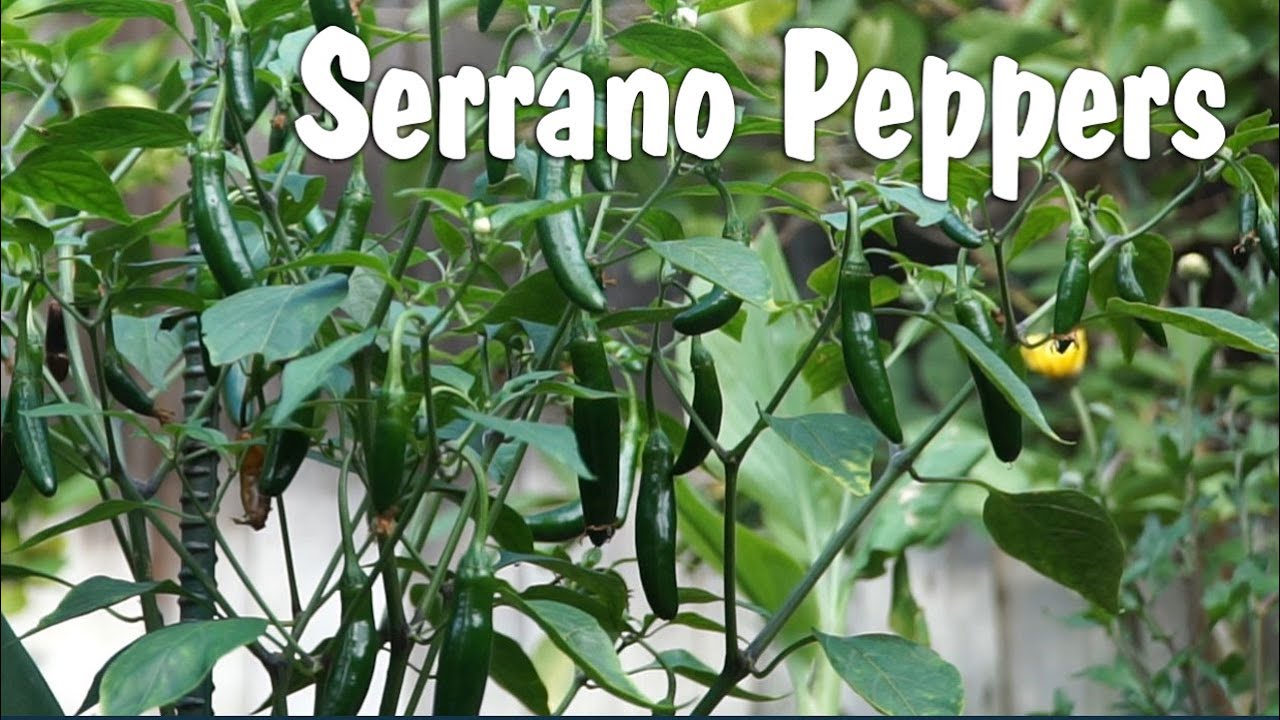 Apart from the weather conditions, well-prepared soil, and water, the quality of the seeds plays a very important role in guaranteeing a successful crop.

Get the seeds from a trusted supplier or check out this useful link:

Yes, these are spicy peppers that are used in hot dishes.

Is the serrano pepper easy to grow?

Yes, the serrano pepper is easy to grow. Follow the guide in this article for more information.

Is the serrano pepper frost resistant?

Yes, but it will not produce high-quality fruit in cold weather.

How to Grow Bachelor Buttons (Cornflowers)