Taking a bite out of an icebox watermelon will send you into the delicious world of this iconic summer juicy fruit.

They got the name icebox watermelon because they are very compact and easy to fit in the fridge (also sometimes referred to as the icebox).

These watermelons earned their popularity because they provide enough fruit to feed one person, so none of the fruit goes to waste.

The icebox watermelons only weigh five to 10 pounds at the point of harvest, contrary to the usual large-size watermelon that weigh between 10 to 45 pounds on average.

The icebox watermelons are native to Africa, and their scientific name is Citrullus Lanatus.

They are part of the Cucurbitaceae family, which is an edible fruit.

All of these watermelons are compact but differ in size. You can decide on the size you want according to their variety.

Due to their small size, the icebox watermelons are also called the short-season watermelons as they take much less time to mature than typical watermelons.

This is great for people looking to grow them in their garden in a short amount of time. Icebox watermelons are trailings plants where their vine can reach up to 12 feet long.

These plants display beautiful yellow flowers about two cm wide before converting the flowers into fruits about the size of a tennis ball (about 5cm diameter).

Icebox watermelon plants are self-pollinators and are much smaller, juicier, and sweeter than traditional watermelons.

They have bright red flesh, dark green rind and are perfectly round. Icebox watermelons are fairly easy to grow; whether you have an extensive selection of crops in your garden or a small patch, these plants are suitable for most gardeners.

If growing in containers, make sure that the capacity is at least 5 gallons (22 liters) and use your vertical space with the help of trellis if your garden is small.

These watermelons require little maintenance providing that you have planted them in moist, nutrient-rich soil and with plenty of natural sunlight, even if the watermelons are growing in a container.

Follow the minimum sowing requirements according to the variety of the seeds, guarantee a successful harvest.

The icebox watermelons are a short-season fruit.

They reach ripeness in up to 85 days, a lot faster than the family size watermelon, which take up to 120 days.

These plants trail on a medium-size stem of up to six feet long (180cm approx.) and produce two to three watermelons in a year.

Icebox watermelons reach different ripeness times according to the varieties of their seeds.

So the bigger the watermelon, the longer it takes to mature.

Sowing best practices should be indoors, and usually, Spring is the best time to do so, about three or four weeks before the first frost.

Top Tip: Get some soil and a container or seedling starter kit, and you are ready to go.

If you live in a warmer climate, then you can sow the seeds in the ground straight away.

Here is what you should do:

After planting your seeds indoors and the first frost has passed, wait for around 2 weeks more until the soil gets warmer or reaches 10C (50F) to take your seedlings out.

If the conditions are reasonable, you should see the first shoots in as little as five to 10 days. T

Transplant the seedlings into the garden when the shoots are visible.

Harvest the icebox watermelon when the color of the rind has changed from bright green to dark green.

Look at the leaf of the stem, and only pick the fruit if the leaf has dried out completely.

Detached the watermelon from the stem using pruning shears but leave about 2cm (1 inch) of the stem.

Doing this will prolong the expiry date.

The icebox watermelons normally require 1 to 2 inches of water per week.

Adjust watering according to weather temperature, concentrating on the roots.

Icebox watermelons growing in a container will benefit from being watered using a drip irrigation system.

Using the right watering techniques will prevent the fruit from being overwatered or becoming dehydrated.

The most important thing is to keep the soil moist, no matter what method of watering you use.

Once the actual fruit of the icebox watermelon plant reaches the size of your clenched fist, adjust your watering schedule and only water the plant when the soil is damp.

Avoid watering a couple of weeks before harvest to help the plant with the process of building up sugars in their fruit.

These plants need about eight to 10 hours of constant daylight to produce fruit.

Avoid planting in even slightly shaded areas or under trees as the quality of the fruit will be significantly affected.

Keep the soil free from weeds as they take away the nutrients and water in the earth from the surrounding plants.

The soil should be warm, about 10 degrees celsius. Covering the area with a plastic bag raises the temperature.

Use nutrient-rich soil and make sure that you check the pH levels regularly.

The ideal soil pH for growing icebox watermelons is slightly acidic and should be between 6.0 to 7.0.

Icebox watermelons as their counterparts grow in tropical to temperate climates.

Protect watermelon from frost as it can damage the plant beyond repair.

Watermelons plants need plenty of space to grow, and the icebox type is not the exception.

Using a 5 gallon (22liters) container would be the best option when transplanting the watermelons.

The pot should have enough holes at the bottom to allow for good drainage.

Propagating icebox watermelon is quite a simple task. Here is a quick guide:

Check for dead vines, yellow leaves, or rotten fruit and cut away from the joint connected to the main vine. Be careful not to cut the main vine. Icebox watermelons are not only clearly much easier to store in your fridge but easier to grow and take care of too.

Although icebox watermelons are a vine plant, you can grow them on raised beds or vertically with the support of trailings if space is prime in your garden.

Icebox watermelon varieties reach ripeness in a much shorter time, so gardeners could opt to grow them alone or together with the family-sized watermelon to enjoy watermelon produce throughout the growing season.

Watermelons are good for your health and are a good source of vitamins A and C.

They are antioxidants and anti-inflammatories and contain minerals such as iron, phosphorus, and calcium.

Consuming a large amount of watermelon will increase blood sugar levels, so keep this in mind when digging into the fruit. 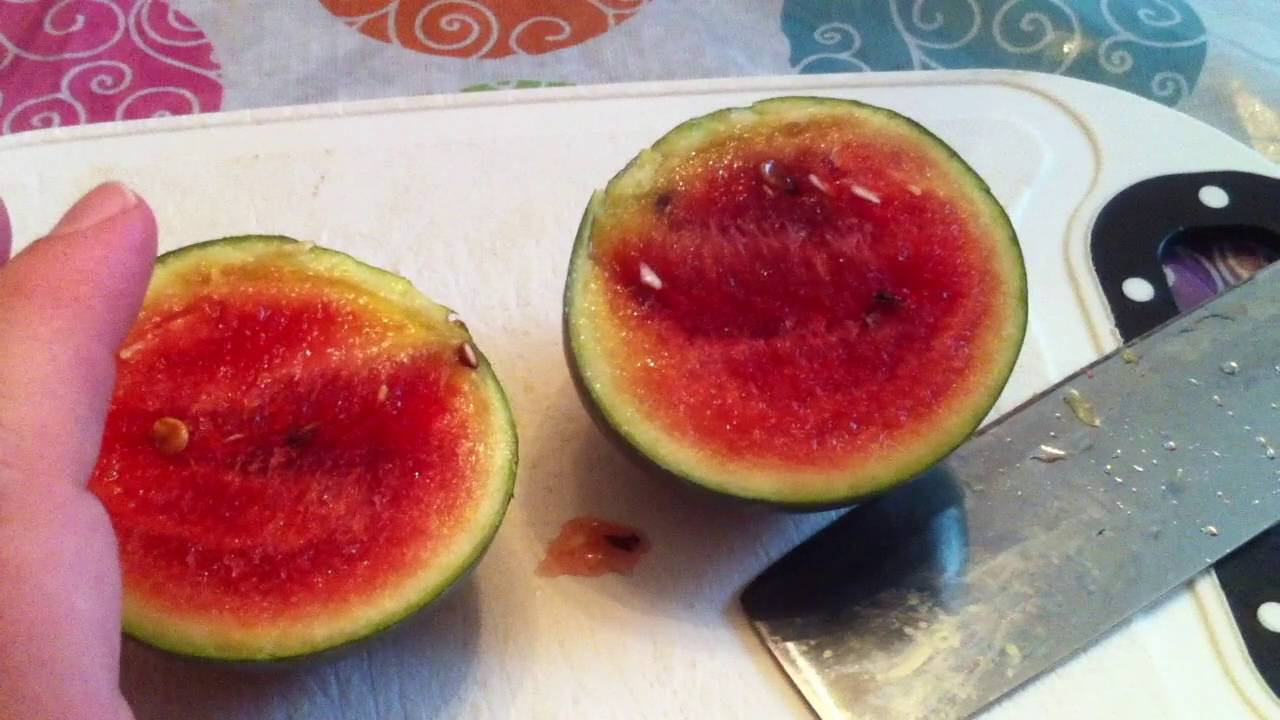 Watermelons have a few enemies that attack the vine, leaves, and fruit.

The most common pests include aphids, fruit flies, and root-knot nematodes, spotted and striped cucumber beetles.

The watermelon plants are prone to plant diseases such as powdery mildew.

Get your quality seeds from a trusted supplier.

Some people save seeds from their actual fruit and plant the seeds directly into the soil without washing them.

Visit your local garden center to purchase seeds if you need to.

How do you know when an icebox watermelon is ripe?

The watermelons change color from bright to dark green.

Its vine dries out (becomes brown), and the leaves next to the fruit start to wilt and dry.

How long is an icebox watermelon’s shelf life?

As with any watermelon, the shelf-life of an icebox watermelon is between 2 to 3 weeks out of the fridge.

After that, their taste deteriorates immensely, but the watermelon stays edible for another week or so.

Can you eat the rind of an icebox watermelon?

Yes, you can eat the rind of a watermelon the same way you do with cucumbers and courgettes.

You can use it in recipes like stir fry, pickles or use it in smoothies.

It’s not only delicious, but it has multiple health benefits such as lowering blood pressure, increase oxygen in your muscles, and improve your digestive health.

20+ Fruits & Vegetables you can Grow in Containers

Ripen Summer Crops on the Vine or Indoors

Canning Peaches in Honey or Sugar

Best Apples for Storage & How to Store Apples

Ripen Summer Crops on the Vine or Indoors